Island City Opera proudly announces that it will present four performances of Giacomo Puccini’s “La Rondine” (The Swallow), a comic operetta in three acts, March 8-17, 2019, at the Alameda Elks Lodge Ballroom, 2255 Santa Clara Avenue, Alameda, CA.   The opera will be sung in the original Italian with English supertitles, fully staged and costumed, and will be performed with a complete orchestra led by music director Jonathan Khuner, directed by Jane Hammett.

Puccini was commissioned by the Carltheater in Vienna to compose a Viennese operetta in the style of Der Rosenkavalier.  The planned premiere in Vienna was prevented by World War I and Italy’s alliance against Austria-Hungary; hence the premiere was held instead at the Opera de Monte-Carlo in 1917. “La Rondine” is set in Paris and on the French Riviera.   Rambaldo and his mistress Magda are entertaining their artistic, if jaded, friends when Prunier the poet declares that romantic love is back in fashion. Magda’s response is one of Puccini’s most beautiful – and difficult – arias, “Chi il bel sogno di Doretta”.  Thus the scene is set for a love story in operetta form.

Prunier pursues his love (Lisette, Magda’s maid) and Magda falls in love with Ruggero, a student whom she meets at the party.  The scene changes to Bullier’s, a restaurant alive with a crowd of artists, students, and young people. Mistaken identity, lush lyrical singing, and beautifully flowing music follow. Opening Night Friday, March 8th, 2019 at 7:30PM 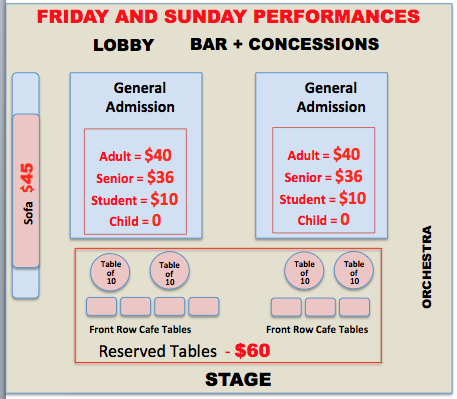 Discount Season Passes: (Save up to $12.  1 ticket any Performance of each show).  General Admission seats $72, Reserved Sofa Seats $81, Large Tables $108 and Front Row Cafe Tables $108.General Admission seats for Adults $40, Seniors $36, Students (13 to 21 with Student ID) $10, and, Child $0. Drinks will be on sale at the Bar at the rear of the Ballroom before the performance and during intermission and immediately afterwards.  Wine will be on sale from the rolling bar near the stage before the curtain and during intermission.

Concessions will be on sale before the performance and during intermission from a variety of concessionaires who will be announce via email prior to the performance.