ALAMEDA, Calif.—May 31, 2015— Opera lovers and supporters of Island City Opera gathered at one of Alameda’s most elegant Victorian homes to celebrate the successful inaugural 2015 season, announce the 2016 season operas, and “trade arias for contributions” to raise funds for the next year. Eileen Meredith, Founder and Executive Director made the 2016 announcement of upcoming operas, RIGOLETTO, by Verdi in January, and LA BOHEME by Puccini in March.

Additionally the Board of Directors displayed a Certificate of Commendation from the City of Alameda, given to ICO for their inaugural first year as our local grand opera company.

The party was held at the stately home of Nancy Gordon, and over 130 attended. Several board and staff came in opera costume, to add whimsy to the event. Entertainment included a concert of arias by opera professionals, Eileen Meredith, Founder and Executive Director, Alex Boyer, Buffy Baggott and Kiril Havezov. James Meredith of the Young Musicians Program, accompanied the singers. The complete program:

Following the concert the amazing singers offered opera and pop favorites up for bid. The tax deductible “bids” helped to make the fundraiser auction a success in exceeding its goal of raising funds for the 2016 Season at the Elks Lodge in Alameda.

“We know that this financial step forward comes with a challenge; to raise the funds required to achieve a higher quality of performance in 2016. I’m sure our supportive community of patrons and volunteers will respond enthusiastically,” added Susan Dunn, Director of Development.

Photos from the May 31, 2015 Enchanted Garden Party were taken by Ron Fujie 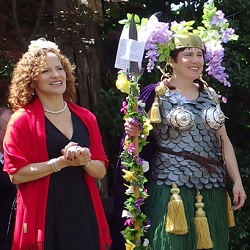